The concept of testing code is often introduced with complex libraries. This hides the core of testing: writing some code that runs your other code and tells you if it’s wrong. This workshop introduces the concept by slowly building up a useful function that helps you test your code.

There should be a function that squares a number (multiplies it by itself). It’s used like this:

Right now we only have one option for checking this works. We have to call the function, log the result, then check that result (with a calculator for bigger numbers).

If you want to check it works for lots of different numbers you’ll be doing a bunch of manual work. You’ll have to repeat this work every time the code changes (to make sure you didn’t break it). It would be helpful to automate this process.

Since you know how to code you can begin to automate this! Write some JavaScript that calls the square function (like above), then checks that the result is what you expect. It should log a useful message to the console using console.error("my message") if the result is wrong.

If your test passes change your expected value so that it’s definitely wrong. Can you see the failure in your browser console?

This is better than manually checking, but not much. We have to write all the same logic for checking whether the values are the same and logging every time. It would be a lot of copy/pasting to write 20 tests.

Most tests check whether two things are equal. It’s helpful if we extract that logic into a reusable function.

Use this equal function to refactor your test above, then write another one to check that square(3.5) is correct.

If your test is passing change your expected value so that it’s definitely wrong. Can you see the error in your browser console?

Write a notEqual function. It should be similar to equal, but log a failure when its two arguments are the same.

Write a test that checks square(3) does not return 10.

Right now our tests are all jumbled together. This means they share the same scope, so we can’t reuse variable names. It’s also hard to distinguish them in the console. It would be nice if each test had a descriptive name.

We could divide our tests up using functions, like this:

We call a test function with a descriptive name, and pass a callback function containing our test code.

Write a function called test that takes two arguments: a name and a testFunction. It should use console.group to log a group labelled with the name. You’ll need console.groupEnd to close the group at the end.

It should call the testFunction callback argument so that the actual test is run. 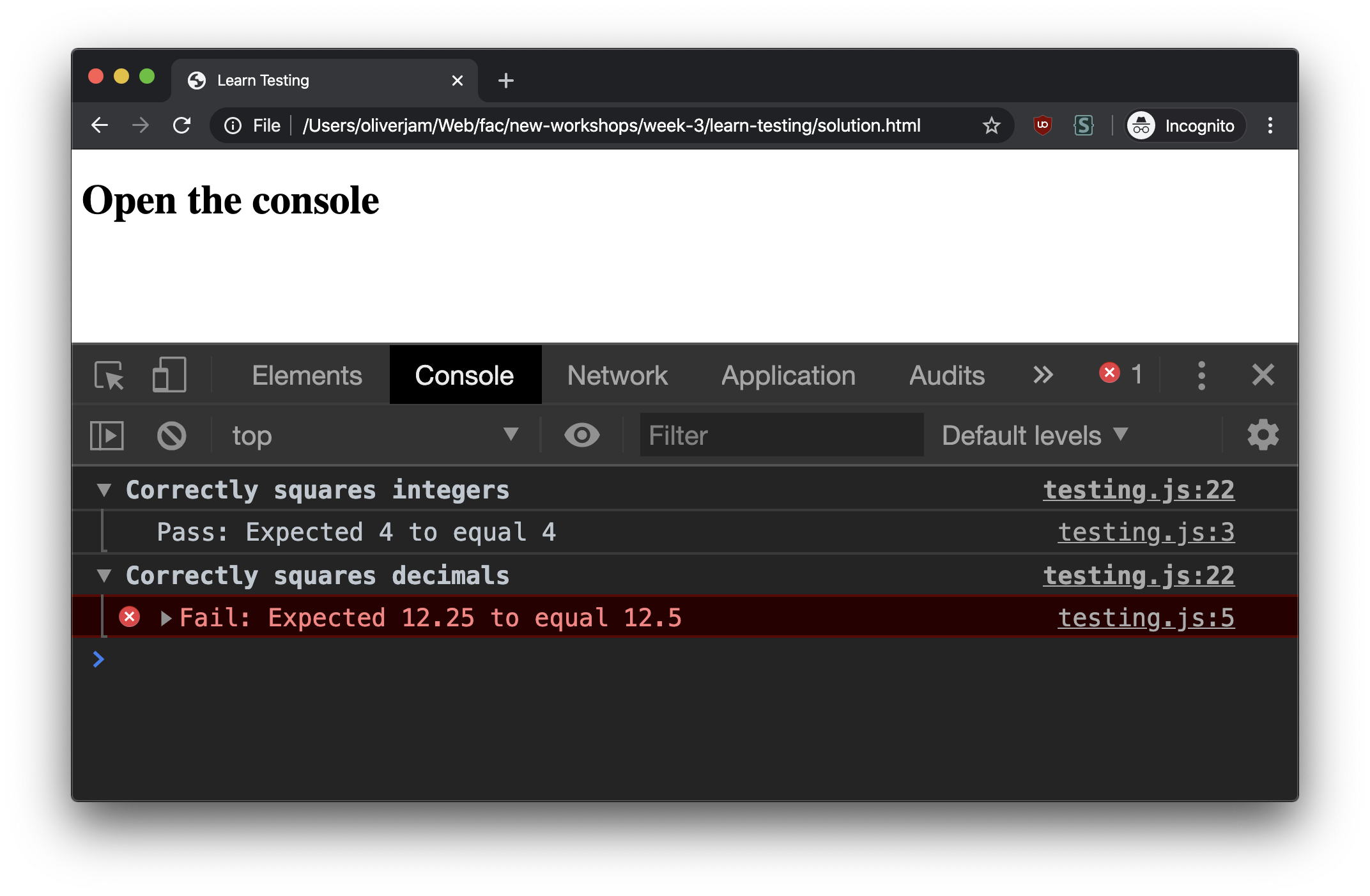 For more complex assertions it’s nice to be able to write a custom message specific to that test.

Amend your equal and notEqual functions so that they take a third optional message argument. Your console.info/console.error should log this message. If there is no message passed in then default to the message you were using before.

We are missing some stuff (support for testing async code, a summary of total passing/failing tests), but we can get pretty far with just this.